"Kapow!" he yells. "Jab! Jab! Jab!"
He pummels his enemies
from atop his Darkwing Duck-sheeted bed.
"Take THAT! And THAT!"
he cries; he is vanquisher, savior of cities,
destroyer of evil, protector of justice;
his fists make the world turn
and make girls sigh in admiration.
He is the greatest-no, wait!
Call Webster’s; greatness
must be redefined. He is super incredible
awesome man! He is--
"Billy! Breakfast!" yells his mother
from downstairs.
"Yes, Mom," he mumbles,
still in his pajamas.
Eggs and toast? Prepare to be punched.
Posted by Laura at 12:14 PM 2 comments: Links to this post

Email ThisBlogThis!Share to TwitterShare to FacebookShare to Pinterest
Labels: poetry

First, go read about my thoughts on e-book pricing over at the LW blog. I'll be here when you get back.

Next, people have been asking me a lot of questions about my next book, mainly what it's going to be about. I'm not used to talking about the series to anyone but my betas (who are probably really tired of it now), so let me give it a go. There will be six books in the series. All of their outlines are done, and all the books are titled. I know what's going to happen in the last scene of the last book. I've got some rough outlines of short stories kicking around, too. I just need to finish writing everything.

The next book is going to be called Saturnine. Thomas Huxley is a secret agent again, and goes looking for the man who nearly killed him--which backfires when he kidnaps Thomas's partner in the squad. And very quickly, that becomes the least of Thomas's problems. Meanwhile, Ariel has to fend off an old enemy.

But that book is on the back burner while I focus on licensing exams and finding a nice white dress for my pinning ceremony. I originally wanted a December release, but my life is always pretty hectic and I never know what I'm going to get done tomorrow, let alone in the next half-year (especially with a project as massive as a book).

And oddly enough, for all the trouble the second book has given me, the third is pretty much done. I finished it last summer. All it really needs is some breezethrough edits and it'll be print-ready. So when you see the second book come out, the third is probably just a few weeks, some formatting and a cover image away. I'll keep everyone posted with my progress.
Posted by Laura at 8:44 PM No comments: Links to this post

Email ThisBlogThis!Share to TwitterShare to FacebookShare to Pinterest
Labels: thoughts 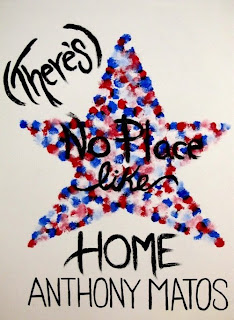 Anthony Matos, who I worked on the student newspaper with in college, just released his first novel, (There's) No Place Like Home. It's currently on Smashwords, and here's the description:

There is an organization that recruits and inserts agents into American jails and prisons with one mission: extermination. The saying goes that everyone deserves a second chance; but in this new age of Depression with over-crowded prisons and backed up courts, a drastic and violent change must happen. Agents are given targets and implanted into prisons with their identities only revealed to selected individuals of power. They establish connections with inmates until they isolate targets and execute.

The largest amount of wealth within the once respected America is now being funneled into the sewer. Murderers, gang members, rapists, pedophiles, inside traders: they’re all enjoying the most modern conveniences our money has to buy. Fully equipped gyms, televisions, 3 meals a day and a roof over their heads while their victims may struggle just to make ends meet; or may have met their end already.

How much money does it take to keep a killer alive compared to how much it costs to bury their victim? Before you answer, just save your breath. You’re living your life the best you can, and your bandwagon ride on the next big social charity isn't important anymore. It’s not going to change what we’re doing here. But what we’re doing here is going to change your world forever.

There's some rough language and it's not meant for the younger crowd, but it has some nice description, such as "The morning sun splashes off red brick buildings and gives them a shine they don't deserve." If you're a fan of dramatic thrillers, check it out.

Making the jump to YA

Part of a writer's dilemma is, when you write a book that doesn't really resemble anything else you've found, how do you classify it by genre?

Awhile back, I mentioned to some of my writer friends that I wished I were writing YA (young adult) fiction. And I'm not just chasing trends here: I really like YA books. Before high school, I read YA and not much else. I'm still around teenagers all the time, so I sometimes read what they're reading. In the past few years I loved books like Tithe and Stargirl. I read Diary of a Wimpy Kid and laughed all through it. I am, in short, a YA addict.

But Flyday, for a long time, struck me as a really non-YA book. The main character, after all, is in his twenties, engaged, and well into a career. But as some of my readers pointed out, that's not the whole story. Much the book is dedicated to 18-year-old Ariel, who essentially runs away from home when her brother is sent to fight in Iraq. She's also a time traveler; tell me that's not cool. There's another major character, Emily, who is a teenage princess. I think this fits quite well in the YA genre.

Plus, I've been reading a lot of adult fiction lately, and I realized that Flyday is a lot more tame than the other books I was seeing. That's not by accident. When I was writing it, all of my betas were teenagers or young adults. Heck, I was a young adult when I finished the first draft (spring of 2008, which would put me at around 19 or 20) before putting it aside to go to nursing school.

I worried that the rock star, Jamie, would be a bad influence on teens, but lots of readers commented that teens would really identify with his struggles. There's some violence, but it's over quickly, and The Hunger Games trilogy qualifies as YA despite the violence it portrays.

So, with lots of encouragement, I'm going to say that this is definitely a YA novel. And I'm really relieved, because now, as I'm writing the draft of the second book, I can expand Ariel's role and not try to force myself to write an adult thriller (which I don't think is a good fit for the story, in any case). I'll let her deal with typical teenage things like romance, but she'll still manage to travel through time and get lots of people angry at her. It's win-win. I'll change the genre categories for Flyday soon.
Posted by Laura at 8:58 PM No comments: Links to this post