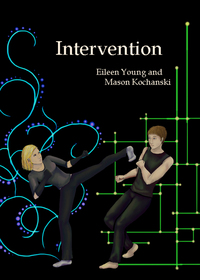 Full disclosure: Eileen is also my editor, and I haven't read her novella. But she agreed to answer some questions for me so I could sharpen my interview skills.

Where is your book available?
"It's available for free download from Feedbooks."

Why did you decide to release it for free?
"Because it was a collaboration with a friend of mine, and we're both big fans of Creative Commons licensing. We wanted people to read it a lot more than we wanted whatever money we could get from it. I've also considered releasing my other projects under Creative Commons licensing, though that also hits the issue of what I'd charge and what kind of margin I'd look for on the hard copies for sale when I was giving away the ebook."

What was the process of co-writing it like?
"It was really interesting, as it was the first joint project that's made it to completion. Mason, my co-author, didn't often want to write portions of it (the boring bits between plot points), but he was full of ideas. It involved a lot of discussion and world-building - way more than is reflected in the story itself - just so we could stay internally consistent."

Give us a quick elevator pitch of the book.
"Evelyn Green, an empathic spy, is teamed up with rookie cyborg Mikhail Cerwinski to investigate anomalies in Tahiti. Clothes come off."

Would you recommend Feedbooks to other authors?
"I think it depends on your genre, and also the way you want to license it. Feedbooks does not allow independent authors to charge for books, which is fantastic if you're aiming for Creative Commons. One thing I've seen a lot recently, though, is authors putting up samples of their books, with links to their Smashwords page at the end. That's not cool at all, and I think against the ToS, though I'd have to check. I just know it annoys me as a reader.  Feedbooks tends to end up with erotica as the most popular category for the user-generated books, too, so it might not be the best place for your contemplative memoir."

So, basically just free books...?
Feedbooks also has an ebook store, which has contemporary titles, and a Public Domain section featuring everything from Emily Bronte's Wuthering Heights to Cory Doctorow's Little Brother.


What current projects are you working on?
"Right now, I'm working on a young adult series set in New York, featuring angels and fairies and a whole lot of snark. The first one is nearing completion, and the first draft for the second is my NaNoWriMo project."
Thanks Eileen!
Posted by Laura at 12:00 AM

Email ThisBlogThis!Share to TwitterShare to FacebookShare to Pinterest
Labels: interview

This author sounds very intriguing and seems to be insightful into current trends and captivating a readership. I look forward to reading some of her publishings.
Sincerely,
Tara Danis